Anna and Kristy participate in a number of mid-distance sled dog races throughout the season, and they serve a variety of purposes in addition to their own inherent challenges and enjoyment.  They condition both the musher and dogs for long distance races and help the musher decide which dogs thrive in the various roles of the team.  These races facilitate testing new gear and strategy.  They often familiarize the musher and dogs to trail sections used in other races and can satisfy entry requirements for the Iditarod and Yukon Quest.

The following is an alphabetical list of mid-distance races Kristy or Anna have either participated in or are considering registering for in the seasons ahead.  And be sure to check out our Mid-Distance Race Blog for the inside scoop on each race they run!

This race launched in December 2009 and is typically held around the third weekend in December.  Originally designed to be 120 miles long, beginning and ending at Knik Lake on the Iditarod trail, the race has been shortened in the past as weather and trail conditions warranted.  The race consists of two heats each approximately 40 miles in length.  Mushers must run a team of 7 to 10 dogs, with the ability to use dogs from a 12-dog pool.  There is no dog drop available during the race, so mushers must return to the finish line with all of the dogs they started with.  The purse is broken into "day money" for the top three finishers on each day and larger purses for overall race placement.

The ACE Sled Dog Race is one of the first of the season, typically held in early December and running 65 miles from Cantwell to the Alpine Creek Lodge.  Tandem mushers (two humans per dog team) is permitted. 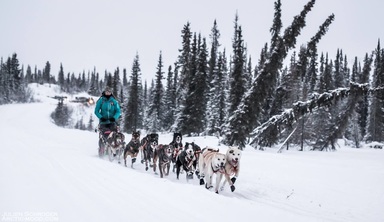 The Aurora 50/50 is held in Big Lake, Alaska, in December of each year.  It's an out-and-back course consisting of ~ you guessed it ~ two 50 miles legs.

The Denali Doubles Invitational covers 250 to 300 miles and, as the name suggests, is quite unique in one respect ~ each team has two mushers.  This race retains an air of exclusivity in that one of the two mushers must have placed in the top 5 places or received the Humanitarian Award or Rookie of the Year Award in any dogsled race prior to sign up.  Teams must start the race with 12 to 20 dogs and finish with a minimun of 8.  A variety of sleds are allowed for this doubles event, although at no time may a team be split into two separate units.  Amongst the other, more standard rules applied to the race, the 2010 guide also mandated "a $75 fine for whining" on the mushers.

This was a new mid-distance race launching out of Eureka over December 31st and January 1st, 2018/19 .  Mushers ran 78 miles per day over 2 days, each with a 12-dog team pulled from an available pool of 18 dogs.  Formerly dubbed the Last & First Race, it will be run as the Eureka 156 for 2019 and launches earlier in December.

Beginning and ending in Paxson, Alaska, the Gin Gin 200 is typically held in late December.  It covers just over 200 miles.  The race is unique in that it is one of the few mid-distance races to have separate mens and womens divisions, and it also counts as an Iditarod qualifying race.  Mushers will leave the starting line with a team of 8 to 12 dogs and must finish with a minimum of 8 dogs on the line.  Dogs can be dropped at the Alpine Lodge checkpoint at race mile 135, which is also the location of the race's one mandatory 8-hour layover.  A cash purse is awarded to the top three overall times.

This 150-mile invitational race hosted by Iditarod Champion Jeff King launches near the Tug Bar in Knik, which is why it is known as both the Goose Bay and Tug 150.  Mushers run 12-dog teams and take an 8 hour mandatory stop.

Officially named the Knik 200 Joe Redington Sr. Memorial Sled Dog Race, this race is held annually on the first weekend of January and starts at Knik Lake.  It was first held in January 1984 and continues to cover 200+ miles of the old historic Iditarod trail as an out-and-back to the Skwentna Roadhouse checkpoint.  Mushers must start with an 8 to 12 dog team, may drop a maximum of 2 dogs (unless otherwise approved by a chief veterinarian), and must finish with at least 5 dogs pulling in harness.  There is one mandatory six hour layover in Skwentna.   There are both 100 and 200 mile divisions.

This 300 mile race, often referred to simply as the K300, is run from Bethel to Aniak and back with designated stops along the route.  Mushers will start the race with as few as 7 or as many as 14 dogs, and must have a minimum of 5 dogs in harness when they cross the finish line.  Dogs are subject to veterinary checks and must be accounted for at each checkpoint unless officially dropped and left in good hands at a designated checkpoint (Aniak, Kalskag, Tuluksak, or Akiachak).  Excluding Akiachak, each dog drop location is also a food drop for the teams.  In addition to close scrutiny of the dogs, mushers will also be checked for mandatory gear, including a sleeping bag, ax, and 4 booties per dog.  A 6-hour mandatory layover must be declared and taken at either Kalskag or Aniak, and a 4-hour mandatory layover must be taken at Tuluksak on the return trail.  The 2013 purse is $110,000, split over the first 20 finishers with the first place finisher claiming $22,000.

This race is known for being both one of the longer mid-distance races and, starting in early-to-mid April, is one of the last of the season.  It begins and ends in Kotzebue, Alaska and follows the Kobuk River.

This is a fairly new race that is usually run in late January.  It is an out-and-back course of roughly 300 miles going from Happy Trails Kennel in Big Lake, Alaska, to Finger Lake and return.  It counts as an Iditarod qualifying race and largely adheres to Iditarod rules.  Mushers must start with 9 to 16 dogs and must finish with a minimum of 5 in harness.  The rules also specify that there will be NO indoor sleeping at any checkpoints, mandating that mushers must sleep with their dog team.  At one checkpoint (Finger Lake), water is provided via a hole in the lake ice.  At another (Yentna), no water is provided and mushers will have to melt snow.

This 150 mile race started in 2004 and consists of three 50-mile legs with two mandatory 5-hour layovers in between.  It starts and finishes at Sheep Mountain Lodge, roughly two hours north east of Anchorage on the Glenn Highway.  Mushers will race teams of 10 to 12 dogs with no substitutions allowed, and a dog drop will be available at the layover checkpoint in Eureka.  A minimum of 6 dogs in harness at the finish is required for successful completion.  Mushers are also required to carry the following gear with them at all times:  cold weather sleeping bag, 22 inch hand ax, one pair snowshoes, 3 gallon capacity cooker and cooking gear, an adequate supply of food for the dogs and musher, and eight booties per dog.  A cash purse will be awarded to the first 5 finishers and additional prizes will be given in recognition of veterinary care and sportsmanship.

Held each January in California, the Siskiyou Open offers a variety of events to cater to an array of participants and skill levels.

This race is held at the end of March and is operated in conjunction with the Gin Gin 200 Race Organization.  When conditions permit, the race launches with a mass start (instead of the typical, staggered, one team start with time equalizations later in the race).  It begins and ends on Lake Louise and there are three mandatory layovers of varying lengths along the trail.  Mushers will start with 8 to 12 dogs and must finish with 7 dogs on the line.

This race was launched in 1984 and has experienced an impressive evolution over the years.  Allegedly started as more of a party run than a competitive event, the Tustumena has become an Iditarod qualifying race and now offers three divisions ~ the full 200 mile race, a 100 mile Amateur Class, and the "JRT" or Junior Tustumena.  It is held in January of each year with the start and finish at Mile 112 on the Sterling Highway in Kasilof, Alaska.  On average, it takes anywhere from 30 to 45 hours to run the T-200, excluding one mandatory 8 hour layover.  A cash purse is awarded to the first 10 finishers, as well as Humanitarian and Sportsman awards. 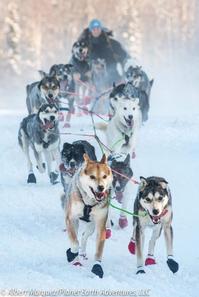 The Willow 300 is a new addition to the Alaskan race circuit, being held in early February.  Mushers start on Willow Lake and run 5 legs ranging from 50 to 75 miles.

The YQ300 is held in conjunction with the Yukon Quest (please click here to view our full Yukon Quest page).  Departure alternates between Fairbanks, Alaska, and Whitehorse, Yukon, Canada, as it does with the full race.  The race covers just over 330 miles.  It is a great way for mushers that are new to the Yukon Quest to experience part of the trail, and the YQ300 also counts as a qualifying race for the full Yukon Quest.